We’ve recently been to the Royal Shakespeare Company’s Rooftop Restaurant in Stratford-Upon-Avon for Afternoon Tea for my mother in law’s Mother’s Day and Birthday present. Yes, as always, we were late and didn’t have a weekend free to fit it in!

The Rooftop Restaurant has a full menu, children’s menu and afternoon tea. We booked online for our visit and it was easily sorted. They do say online to ring and let them know what type of Afternoon Tea you want. We did this and but it didn’t matter, they asked on the day what we wanted.

When we arrived our table wasn’t ready so we were asked if we wanted to take a seat at the bar or have a seat in the waiting area. We chose the waiting area. It was one of the nicest waiting areas I’ve ever sat in! It had floor to ceiling windows on both sides, three floors up, to which you could see out onto both sides of the Theatre and out into Stratford-Upon-Avon. It was a lovely view, it’s just a shame the sun wasn’t shining!

After waiting only a couple of minutes we were shown to our table which was set up for five, with a high chair as one of the seats by the window and the door to the balcony. The balcony overlooked the River, Alfie loved it!

We went to the Rooftop Restaurant when they had boat races on the river and we were able to watch these go by from our table. Alfie was lucky that Nanna was nice enough to take him out onto the balcony so he could be nosy.

We ordered what we wanted, four Rooftop High Tea’s, and we didn’t have to wait too long for them to arrive at the table.

We had four between the five of us, seen as Alfie is a toddler and he was going to share with Dan’s mum.

When they first arrived I really didn’t think that there would be enough for all of us. Looks can be deceiving! We actually ended up asking for a box to take home the cakes that we couldn’t quite fit in. 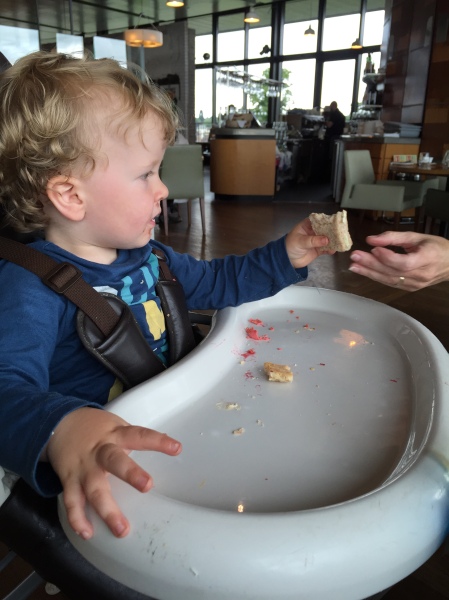 They were so well presented, the cakes were dainty and cute and the scones were delicious, especially with a generous amount of Jam and clotted cream! Alfie demolished everything that we gave him too, he is a good test on good food.

I opted for a Latte and everyone else had Tea. I am a coffee lover and this was a very good coffee. I would’ve had another coffee, but I’m sure I’d have been bouncing off the walls, and Dan’s tea was easier to steal!

So, if you are in Stratford-Upon-Avon for the day, or a few days, make sure you check out the RSC Rooftop Restaurant, we would really recommend it. It has some yummy food, lovely views and is family friendly. The waiters and waitresses were really good with Alfie! It would be the perfect stop after a stroll along the river and a bit of shopping in the town.

Make sure you stop at the Christmas shop too!

Are you a jam or cream first person, that is the question…?